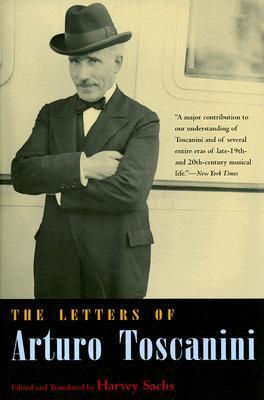 The Letters of Arturo Toscanini

"Scrupulously compiled, edited, translated and annotated by Mr. Sachs and handsomely presented by Knopf, this is a major contribution to our understanding of Toscanini and of several entire eras of late-19th- and 20th-century musical life, especially the almost improvisatory looseness of opera in Italy, the glamour of European festivals and the concert life of the United States. It’s also a wonderful, sometimes downright salacious read .... This collection is valuable in part because it is so unexpected. Toscanini was a very private person; he declined interviews, never cooperated on books about himself, refused all awards and honors. When Mr. Sachs published his biography in 1978, he wrote that ‘Toscanini’s letters ... are relatively few and often uninformative.’ Little did he know .... The preponderance of love letters, many of them enthusiastically explicit, not to say pornographic, posed a problem for Mr. Sachs… [who] expresses great pain that he is violating Toscanini’s lifelong wish for privacy, as indeed he is .... Outside the bedroom, however, there is still an enormous amount of compelling material here, from personal insights into fellow artists to Toscanini’s own mixture of confidence and self-doubt to his punishing quest for perfection to his anger and depression as World War II drew closer and finally broke forth. For all Mr. Sachs’s concerns about including the love letters, it is in the pouring out of his soul to [Ada] Mainardi that the most intimate aspects of his art are revealed. Those letters make the best case for Mr. Sachs’s decision to include them in this wonderful collection, and for the indissolubility of art and life."

--John Rockwell
The New York Times
"Mr. Sachs was the obvious choice to edit the growing body of Toscanini correspondence, and this book is the fruit of his labors. It is an impressive contribution to the field of 20th-century classical-music studies, edited with scrupulous care and wide-ranging erudition… .... Toscanini’s candid, sometimes gleeful, descriptions of his [amorous] ardor ... give a human dimension to a man who was admired to the point of being revered during his lifetime. Yet the principal pleasure of reading Toscanini’s letters is the intimate, first-hand view it affords of the North Atlantic music culture in the final days of its direct, personal connection with the great composers of the Romantic era .... [The book is] a mighty contribution to the source literature of modern music."
--Jamie James
The Wall Street Journal, New York
"[Toscanini’s] alleged virtues -- fanatical dedication, unprecedented standards of accuracy, utter commitment to canonical composers like Beethoven, Wagner, and Verdi, and perfectionist demands on orchestral players -- became vices, depending on which side of the debate one was listening to. The argument was bound up with the myths surrounding his personality: he was seen from afar as the epitome of the egocentric artist -- a description that his letters, now compiled, edited, and translated by Harvey Sachs, both confirm and undermine, since they make him seem more human and appealing. The letters, many of which Sachs didn’t even know existed when in 1978 he was writing what remains the standard Toscanini biography, are immensely enjoyable to read and an exceptional record of a man and an era. Toscanini was not a stylish writer -- he was often the reverse -- but in his correspondence he was passionate, sometimes comically juvenile, often seething with rage, misanthropic, not intellectually sophisticated but widely curious, heroically principled about certain big issues, and wholly unprincipled when it came to issues like marital fidelity .... [Sachs’s] notes to the letters are exemplary .... Toscanini was prescient in this respect [the early music revival] and others; he was also exasperating, inspiring, endlessly striving and dissatisfied. His large, cranky humanity comes alive throughout his letters, as it does in his best recordings."
--Michael Kimmelman
The New York Review of Books
"Harvey Sachs’s edition of Arturo Toscanini’s letters, wisely introduced, carefully presented and finely annotated, is one of the most absorbing books of its kind that I have read in years. Sachs is the author of a 1978 biography of the conductor that remains a monument of erudition, judicious judgment and aptly focused sympathy for the subject in hand…. The Toscanini depicted in his own words emerges a figure of near-tragic grandeur, part Dionysus, part Apollo -- in fiction he would require a Thomas Mann to do him justice, tormented as he was by tempests of rage, by unrealisable artistic goals and drives and by (as he saw it) his incorrigible inadequacy in making relationships .... [H]e could be staggeringly honest, cruelly self-critical. A lament for ‘my unpleasant personality’ and the pain it caused others runs through the collection like a leitmotif. In truth, the salacious aspects of the collection are no more remarkable than all the other insights into Toscanini here provided. His cultural range is revealed as infinitely wider than generally recognised; references to his involvements with poetry, art, philosophy and, of course, politics are constant. Comments on other musicians are never less than incisive, and often drily witty. Musical aperçus abound .... This is, in sum, a splendid achievement, and a timely one. In recent years Toscanini, whose nonpareil recreative genius was stamped with (in David Cairns’s fine phrase) ‘exceptional feeling for large-scale musical architecture ... for the singing line and the wide-spanned arch of melody’, has in the writings of Joseph Horowitz and Norman Lebrecht been caricatured as an artistically barren, even malign figure, even a monster. It was past time to reclaim the other, the real Toscanini, warts -- and greatness -- and all, and Sachs’s collections will help us all do so."
--Max Loppert
BBC Music Magazine, London
"Now this is one you really can’t miss. These letters, which span a period of some 70 years, are a revelation, principally because of how they focus Toscanini’s fierce intelligence, his vulnerability, humility, constant hard work and unquenchable passions .... Sachs’ many well-researched footnotes are often as interesting as the main texts and his selections seem judicious. We’re told that there are probably many more letters in private hands, so who knows if the probable success of this current collection might release the floodgates and prompt a second volume? I haven’t enjoyed reading documents of this kind, or learnt as much from them, since perusing the diaries of Kenneth Williams or the letters of Wallace Stevens. They’re a great read, but definitely not suitable for a single sitting. So much anger, desperation, adoration and heightened opinion, not to mention all the colourful hyperbole, can be wearing. But it’s well worth the sweat."
--Rob Cowan
The Gramophone, London
"[The book] provides us with an exemplary picture of the Maestro’s whole life, furnished as it is by detailed notes that illuminate every ‘historical’ detail of the vast correspondence, not only with [Ada] Mainardi but with conductors, musicians, literary figures, friends and relatives…. As a man of music and a political man, he appears vividly in all of his actions; thus, even in the amorous troubles revealed in the correspondence, the ethical-political side of his personality and his unshakable moral (but never moralistic!) rectitude are always present, and this allows us to consider the Maestro not only as a talentiert man (as the Germans would say, with reference to his perfect ear and his incredible musical memory) but as a man of the utmost integrity in his professional relationships and passionately sincere in his sentimental vicissitudes."
--Gillo Dorfles
Corriere della Sera, Milan

The Ninth: Beethoven and the World in 1824
A personal interpretation of Beethoven's last symphony and its cultural and political surroundings and impact.

The Letters of Arturo Toscanini
Hundreds of fascinating letters, written between 1885 and 1956, by the most famous conductor in history.